There can be no doubt that the technological advancements of the digital age have produced a myriad of benefits.

Access to information has never been more universal and no preceding generation ever had the ability to share with others and impact their world as we do today. You could say that this is indeed the best of times.

What is also true, however, is that there is a dark side to our wholehearted embrace of the digital age. Ironically, that drawback stems from the very gadgets we use.

Specifically, it arises out of how we handle discarded electrical and electronic devices or e-waste. There is a growing concern as to the negative effects e-waste has on the environment. It is an issue that must be tackled by individuals as well as by large and small corporations.

Dell is one of the companies leading the way in lowering the environmental impact of e-waste. 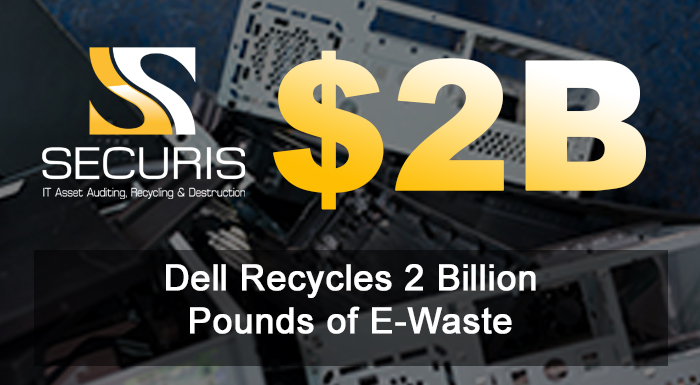 With the assertion that “Technology drives what’s good,” the company has developed and implemented the Dell 2020 Legacy of Good Plan. The initiative began in 2013 and Dell has provided annual updates on its progress in achieving the stated goals.

One amazing revelation from the 2018 update is that Dell has already been able to meet its goal of recycling 2 billion pounds of e-waste by 2020 – that’s 2 years in advance. This was achieved through Dell’s industry-leading TakeBack initiative.

What is Dell doing with all of this e-waste which many of us simply discard without a second thought? Here is a quick look:

Gold is one of the precious metals used in today’s electronics. Bust what most people don’t know is that Americans alone throw away in excess of $60 million worth of gold (and silver) each year within their discarded phones.

Dell has revealed that it uses roughly 7,000 pounds of gold annually in its manufacturing processes although only small amounts go into each device. It is currently on a mission to recover gold from e-waste and reuse it in new products.

As the company points out in a January 2018 blog post, its recycled gold is also making its way into jewelry. Dell and actress Nikki Reed have partnered to create a line of jewelry which uses gold from recycled e-waste.

Dell has also recently partnered with SABIC, a chemicals manufacturing company, to recycle carbon fiber from e-waste. That carbon fiber, estimated at around 1 million pounds, is being reused in new computers the company produces. In fact, all the carbon fiber in some Dell items is recycled from e-waste.

Reducing the impact of plastics

Over 90 products manufactured by Dell now boast the inclusion of closed-loop recycled plastics. That means Dell is focused on ensuring the plastics it uses are all fully recyclable.

It is also going a step further by reusing some of that same plastic, once it becomes e-waste, in its new products. The company also makes use of marine plastics in its effort to do as much as it can to protect the environment.

According to STEP (Solving the E-Waste Problem), there were approximately 75 million tons of e-waste produced in 2015, which is triple the figure reported for 2010. It is true that even Dell’s mammoth achievement of 2 billion pounds of recycled e-waste pales in comparison to the staggering amount of e-waste produced. It is, nevertheless, a start.

Thankfully, Dell is not the only company making a dedicated effort to reduce, reuse and recycle e-waste. Its competitor Apple, for instance, is also on a mission to make full use of recycled metals in its new products. The company is making strides in reusing plastics and other materials from its manufacturing processes and e-waste.

Large technology companies like Dell are doing their part to ensure the figure begins trending downward. Your company can contribute to this environmentally-friendly initiative by contacting an IT recycling partner like Securis to find recycling solutions that best suit you. Contact us today to see how we can help.