How is a TV Recycled?

Whether you’re upgrading to a bigger flat screen or laying a defective one to rest, there comes a time when you must dispose of your television. You can either throw the TV in the garbage, where it will likely end up in a landfill, or you can recycle it and give it new life.

But how exactly does recycling a television work? Can you recycle any old television? Where do you go to recycle it? In this post, we’ll answer these and any other burning questions you may have about recycling a TV.

The first thing to determine is the type of television you have. There are two main kinds: CRT and HDTV. The CRT, or Cathode Ray Tube, was more prominent in the 90s and early 2000s, and refers to television sets that were bulkier and used a fluorescent tube for its internals.  According to a 2011 EPA-commissioned report, over 580 million CRT televisions have been sold in the U.S. since the 1980s, not counting computer monitors. The HDTV is flatter and uses the more energy efficient LCD, LED, or Plasma technology (the latter of which has been mostly phased out). 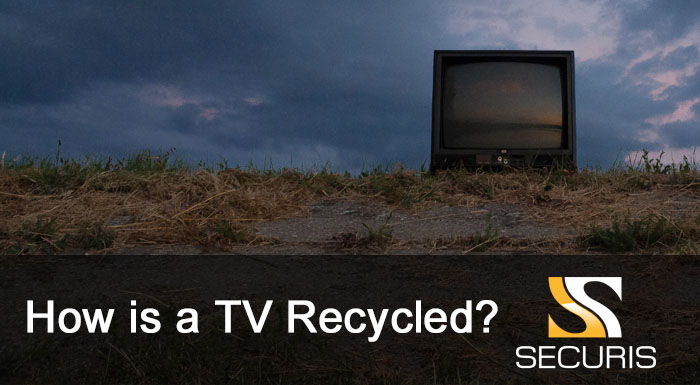 Between the two, CRTs have been harder to recycle due to their design. They typically hold lead, cadmium-based phosphorus, and other toxic chemicals in the box. Because of these chemicals, disposing of a CRT can actually be dangerous and harmful. Recyclers are able to separate the chemicals safely and reuse the glass panels for new television sets. The lead is trickier to recycle but can be reused for certain cleaning agents.

Both kinds of television are also designed with a substantial amount of plastic, typically around the bezel, the stand, and the television remote. Modern televisions are thankfully made with recyclable plastics, so recyclers can reuse it in new televisions, or other similar devices.

TVs also have a handful of microchips that work to power the system and display an image on the screen. These microchips are made from a mixture of silicon and metal. They can be salvaged, shredded, or smelted towards new devices.

Recycling is just one solution for sustainable disposal. These old television sets, if still in a working condition, can also be donated to schools, shelters, faith-based services, and other community organizations. CRTs can last up to 11 years, so if it has only been lightly used, it can always find life in a different home.

CRTs are also slowly becoming antiques. Whereas once they may have been considered old pieces of junk, as they become increasingly difficult to produce and find, they are regaining value in pawn shops and resellers. This, of course, also depends on the quality of the television.

Why Recycling is Still the Way to Go

Ultimately, recycling is still the best option for salvaging an old television set. For one, most TVs die out, preventing you from donating or reselling them. Second, they help divert salvageable and reusable materials into the production facilities for new TVs. Finally, recycling can also benefit recyclers and their teams with more business.

If you own a CRT and are planning to recycle it, you must go to a special recycling facility. This is the only way to ensure that the toxic chemicals are safely removed and that the useful materials are reused. If you own a company and are caught improperly disposing of old televisions, there is a chance that you may even be fined for your infraction.

Televisions are one of the most widely bought electronics on the market. It is up to us as consumers to properly dispose of them when they are no longer needed. Doing so ensures we cultivate a safe, clean, and sustainable environment for us and future generations.

Securis accepts TVs at their monthly recycling event, although there is a fee associated with recycling a television. At the time of this publication, the fees are as follows:

Learn more about Securis’ community recycling event – now with touch-free recycling options to comply with social distancing due to COVID-19.