When Should You Use A Degausser?

Remember back in the 80s and 90s the care, time, and effort it took to make a mixtape? Sure, the hard work was worth it to have all your favorite songs of the moment on one cassette. There were also the unfortunate instances when, in the middle of creating a mixtape, a person would accidentally erase some songs. All that work ruined and the mixtape creator would have to go back and try again. That is, essentially, what a degausser does – removes and disrupts data stored on a magnetic field.

A degausser is a machine that ensures the destruction of data by changing the magnetic domain where data is stored in many of today’s critical devices.

Degaussing is one of the best added steps to take before destroying or shredding a hard drive because it destroys the information contained on the drive before shredding. Aside from the hard drives in most of the devices used today, it also works on VHS tapes, cassettes, LTO and DLT tapes, and other magnetic storage devices. Degaussing will not work on optical storage devices like CDs.

A degausser creates a controlled magnetic field that is used to erase information stored magnetically. All magnetic storage devices have an Oersted (Oe) rating that tests the coercivity of a device to determine the strength needed to properly erase the stored data.

Degaussers disrupt the hard drive’s coating and removes the magnetic memory from it. This process destroys the data by randomizing  the data pattern that exists so none of the information can be retrieved.

Once degaussed, many devices are still reusable. Generic magnetic storage devices like reel-to-reel tapes and VHS video cassettes are the most likely to be usable after degaussing. The downside is that these storage devices are so outdated that the cost savings to resume them are negligible.

Hard drives in servers, computers, laptops, tablets and other modern technologies are rendered unusable by the degaussing process. The shift in the magnetic field in these devices is permanent, which is ideal for data destruction. 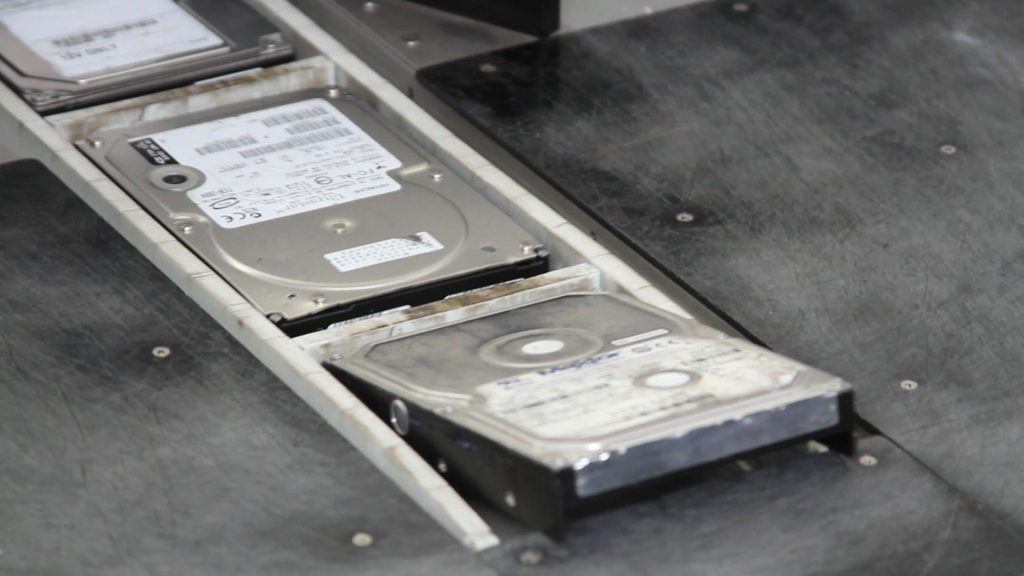 As mentioned above, all magnetic devices have an Oersted (Oe) rating. Oe is the measurement of a magnetic field in a vacuum. For modern tapes, the Oe rating is typically around 1,800 or higher. Hard drives, on the other hand, can easily reach 5,000 Oe. The Oe rating determines how strong of a degausser needed to destroy the stored data.

Coercivity is often used interchangeably with Oe because coercivity determines the strength of the magnetic field that must be applied to reduce a magnetic induction to zero – which is the point at which the data on hard drives is destroyed. The higher either Oe or coercivity, the stronger the degausser needed to ensure that the stored data has been destroyed permanently. 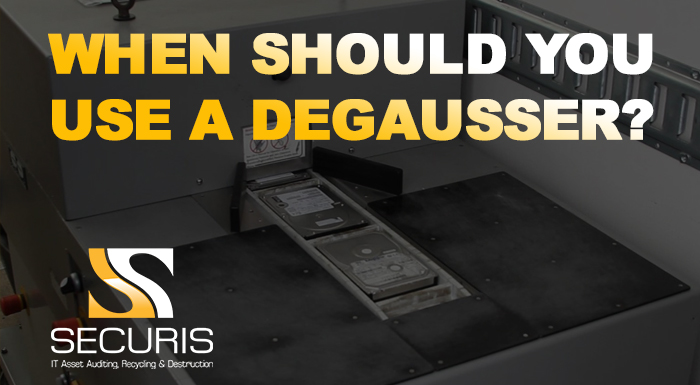 Do You Need to Degauss?

There are times when degaussing must be used – such as when handling any information that requires a clearance level such as “Classified” or “Top Secret.” Clearance-designated information must be deleted following disposal standards and procedures that include degaussing.

Degaussing is also highly recommended for HR companies, financial firms, companies with proprietary information, and anyone who stores health or personal customer information. Additionally, any business that collects or stores credit card or personally identifiable information on its employees or customers should seriously consider degaussing. It is the best way to ensure proper data destruction prior to a full hard drive shredding to guarantee sensitive data is not recoverable.