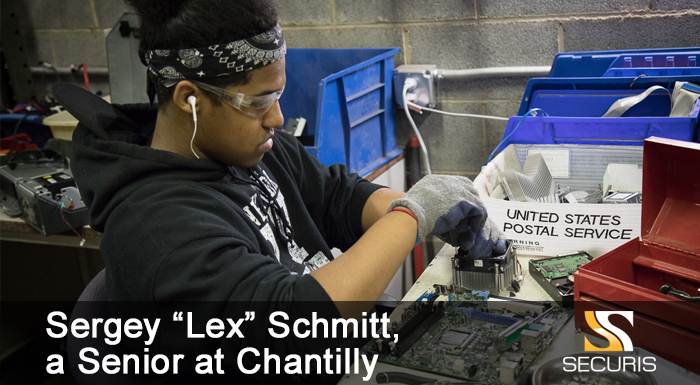 When Sergey “Lex” Schmitt, a senior at Chantilly High School, graduates in June he will transition to the area Davis Career Center to pursue vocational and life skills training, but he already has a leg up on his competition due to a special work training program he has been participating in for the past year.

Securis, headquartered in Chantilly, holds three different classes, training up to 12-14 students each day, though the county’s Career Preparation Class and Education for Employment for Special Education.

“It was hard at first because I did not know how to use the tools,” says Schmidt. “I learned how to take apart computers and became good at it. I like the people who helped me learn this trade.

His parents said that he gained confidence working at Securis, and they thank the Chantilly High School teachers and the staff at Securis for giving their son the opportunity.

Sue Collins, a Career and Transition Teacher at the public high school, explains how the program works. “Students go to the company’s nearby facility anywhere from four to five times a week, usually accompanied by a teacher. They learn work skills, life skills, and social skills. They get respect, dignity and joy, and self-worth – It builds up their self-confidence.”

Securis has been proactive in designing work environments and tasks that are appropriate for each student, and is dedicated to hiring employees with disabilities, says
company Founder and President Jeremy Farber.

“Students with special needs can sign up for the program and a bus brings them to our facility a few days each week,” says Jeremy. Some of them have come to Securis full-time after they graduate. It’s been a great way to participate in the local community and help kids. We have provided training and work experience for over 100 students with disabilities to date.”

One student worked for the company for five years before moving out of state as a full-time on-site supervisor, teaching students with disabilities how to disassemble electronics and follow our safety guidelines, while serving as a mentor and role model for the students.

The company has recently initiated a partnership with the high school to create more opportunities for students with disabilities who are transitioning from high school, such as paid internship opportunities with the intent of hiring students for part-time summer employment. 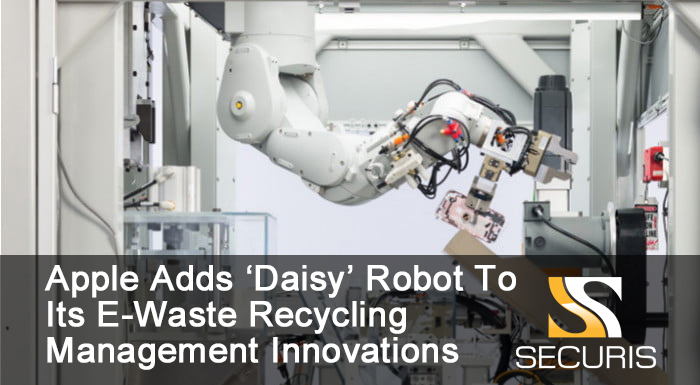 Apple is continuing its course to implement green processes in manufacturing and retail. As a symbolic move ahead of Earth Day, the tech giant launched Daisy, a new recycling robot that can disassemble iPhones to recover valuable materials. even after the biggest failure of facetime for android technology, apple still believes video calling future for android.

Daisy is a successor to 2016’s Liam, developed by Apple in-house engineers. The robot can take apart 9 different iPhone models and sort the high-quality component from the old smartphones. And Daisy does this fast: in one hour she can dismantle a total of 200 iPhones without damaging the precious metals like copper, gold, and aluminum inside.

Apple has also encouraged users to support their recycling efforts. Apple GiveBack enables trading in old phones in exchange for an Apple Store Gift Card. Meanwhile, phones that are no longer eligible for credit are still accepted and recycled.

Daisy is one form of technology dedicated to urban mining, the process of reclaiming compounds and elements from discarded electronic and electric equipment (EEE) or e-waste.

Urban mining is a response to dwindling resources and environmental problems caused by a linear supply chain, where materials are mined, and products are manufactured and thrown away in landfills after use.

Our hyper-consumer lifestyles are slowly but surely taking a toll on the environment. An average smartphone, for instance, requires nearly 165 pounds of raw material to be produced.

Aside from excessive use of non-renewable materials, technological waste is also a (literally) growing issue with the industries’ linear supply chain.

Indeed, e-waste is a serious matter that is not only a concern for giant companies but for every single person worldwide.

According to the Global E-Waste Monitor report, close to 4 billion people are using the Internet. With the majority of the population owning a gadget or two, the electronic waste totals a monumental 44.7 million metric tons – equaling 4,500 Eiffel Towers!

Apple is paving the way for tech firms to consider going green. The company recently announced that their operations are now 100% powered by renewable energy, with considerable investment on renewable infrastructure and technologies. This means that every Apple data center, retail store and office in 43 countries run on clean power.

The brand has also vowed to conserve precious resources by completely relying on recycled materials for the production of all iPhones, MacBooks and other devices.

Tim Cook, Apple’s CEO, is adamant that pushing to establish optimal recycling and renewable energy systems is essential “because we know the future depends on it.”

Apple’s transition to greener operations is encouraging other companies and organizations to make the shift as well, and experts believe that this is a smart move for companies because it allows for long-term savings and brand credibility, apart from giving the opportunity to help the environment, of course.

David Briefel, a regional sustainable design leader at Gensler, says that companies that incorporate these strategies enable them to set the bar for everyone else.

Urban Mining as a Lucrative Solution

For years, we have neglected the potential of e-waste as a resource. But amid rising demand for electronic devices, relying on virgin mining alone is too detrimental (and expensive) for manufacturing companies.

Now that big players like Apple have shown that the closed-loop economy can be quite profitable, more and more companies are gradually adopting environment-friendly solutions.

And why not? Recycling e-waste has great financial potential. Urban mining, in fact, has been found to be a cheaper option of extracting precious metals compared to virgin mining. A great example is gold: there’s 80 times more gold in a ton of smartphones than what is generally found in gold mines.

Aside from common metals, urban mining can also retrieve rare metals like europium and terbium, used in TV picture tubes and lighting. As of late, close to half of these rare metals are sourced from urban mining in China.

Just like renewable energy, e-waste management and urban mining are drawing commitment from companies and investors around the world.

The potential for both environmental protection and profit is something that visionaries just can’t pass on. E-waste has now literally become a precious gold mine.

If tech giants like Apple are making urban mining a key part of their business brand, will societies finally get serious about recycling? 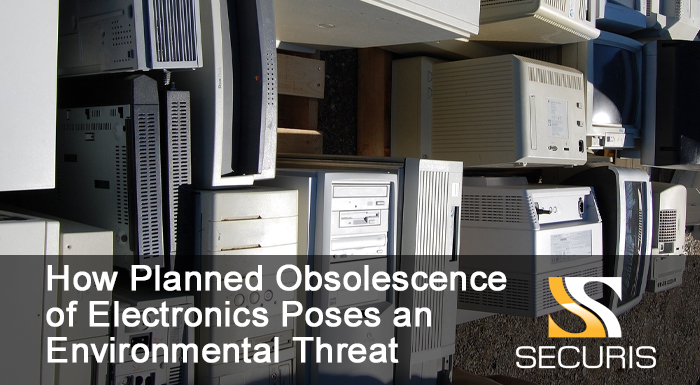 It turns out, planned obsolescence is not only harmful to a consumer’s wallet; it’s a considerable danger to the environment as well.

In December 2017, Forbes published a piece regarding the class action lawsuit filed against Apple, following the company’s confession that it slowed down older iPhones in a bid to encourage Apple users to buy their latest, “speedier” models.

They go on to point out that Apple is not the only company that does this—not by a longshot—and, of course, the financial benefits these companies stand to gain from such an act are considerable. They end the article by pointing out that while planned obsolescence is great for investors, it’s not as forgiving on consumers.

According to Wikipedia, planned obsolescence (or “built-in obsolescence”) is “a policy of planning or designing a product with an artificially limited useful life, so it will become obsolete […] after a certain period of time.” It’s the tech equivalent of planting a time bomb. Once the clock hits zero, the product’s usefulness and usability go to null.

Why do companies do this? As mentioned earlier, it’s to encourage “loyal” customers to buy the latest model. Frustration, after all, is a very effective motivator, and nothing frustrates us more than something that is no longer functioning the way it’s supposed to.

Slower processing power, unsupported systems, limited storage space, obscure spare parts — all these are just some examples of what happens to gadgets and their subsequent components when they hit planned obsolescence.

Is it any wonder, then, that people never seem satisfied?

Perhaps the most significant impact planned obsolescence has on the environment is the electronic waste it eventually leads to.

Put it this way; you already have a perfectly good smartphone. It can connect to WiFi, no problem. It has no issues making and receiving calls and messages. It’s got an ample amount of storage space for games and apps, and it’s got a decent front- and back-camera to boot.

After two years of use, everything slows down. You can no longer download apps because your system is outdated. You can’t update your system either because it’s no longer supported. You’re running out of memory and you can’t expand the existing card. On top of all that, there are a few minor—but inconvenient—glitches every time you try to use it. What do you do?
You go out and buy the newer, upgraded model.

What happens to the old one?

This is something a lot of us don’t like addressing, but ignoring a problem doesn’t make it go away. The fact of the matter is that the old units have to go somewhere, and we consumers usually only choose one of two options: into a drawer or box, to be forgotten, or into the dumpster for the garbage truck to take care of.

As a generation that demands so much technology, you’d think we’d be a little more sensitive with our leftovers. 2012 saw 3,420,000 tons of e-waste generated. Only 29% of that was recycled. The rest ended up crowding already-crowded landfills and dumps.

We’re up to recycling about 40% of all electronic waste on average, but that still leaves a heartbreaking 60% to rot. And it’s this rotting that’s the problem because the metals and materials that make up average smartphones, laptops, and tablets are in no way biodegradable. Nature cannot readily reabsorb them.

In an act known as bioaccumulation, the lead, copper, and mercury found in these gadgets can end up poisoning sources of fresh soil and water nearby. Incinerators that “handle” tons and tons of e-waste end up releasing toxic fumes into the air, which—in overwhelming quantities—can lead to serious health problems such as respiratory issues, lightheadedness, mental fog, and lead poisoning.

Corporate Wallets vs. the Environment

By releasing new models every few years, corporations are expending vast amounts of production wastes and discards to manufacture their electronic products. This alone is already troubling, as electronic manufacturing waste heavily outweighs residential e-waste (by as much as 5 times even, as far as EU is concerned).

By forcing customers to buy the latest smartphone, tablet, or wearable, corporations that employ planned obsolescence are forcing people to discard their older models. For consumers, it’s a financial inconvenience. For the environment, it’s a potentially dangerous strain.